The following information is from the 2014 Injured Resources & Services Update adopted in November 2014 by the Exxon Valdez Oil Spill Trustee Council.

Although the fish and wildlife resources that appear on the List experienced population-level or chronic injury from the spill, not every species that suffered some degree of injury was included. For example, carcasses of about 90 different species of oiled birds were recovered in 1989, but only 10 species of birds were included on the List. 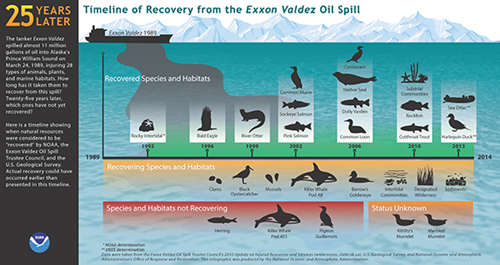 Moreover, it should be noted that the analysis of resources and services in relation to their recovery status only pertains to amelioration of effects from the 1989 oil spill. When the Restoration Plan was first drafted, the distinction between effects of the oil spill and the effects of other natural or anthropogenic stressors on affected natural resources was not clearly delineated. At that time, the spill was recent; the impact to the spill area ecosystem was profound and adverse effects of the oil on biological resources were apparent. As time passes, the ability to distinguish effects of oil from other factors affecting fish and wildlife populations diminishes. Currently, natural and human perturbations may be hindering recovery of some resources initially injured by the spill. While those perturbations warrant consideration in defining and assessing recovery, they do not negate the responsibility of the Trustee Council to pursue restoration of spill-affected resources. However, the passage of time and the evolution of science from the listing of species to an ecosystem approach have shifted the purpose and utility of the Injured Resources and Species List. The Council recognizes that the complexities and the difficulties in measuring the continuing impacts from the spill result in some inherent uncertainty in defining the status of a resource or service through a specific list and the Council’s focus has accordingly expanded to a more ecosystem approach. The 1994 Plan also outlined an ecosystem approach to restoration and this more integrated view has become increasingly recognized as essential and the original organization of efforts through a list of species in the Update is no longer a viable approach.

Recognizing that funding for future restoration is limited and that it is becoming increasingly difficult to distinguish between spill impacts and other effects in measuring recovery, the Council’s efforts are now focused on making an organized and strategic transition to a modest program which focuses the remaining funds on a few specific programs. Building on its past efforts, the Council has identified the following areas of focus: (1) herring; (2) lingering oil; (3) long-term monitoring of marine conditions; (4) harbor protection and marine restoration; and (5) habitat acquisition and protection. 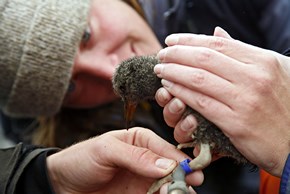 The Council also recognizes that long-term management of species and resources initially injured by the spill lies with the agencies and entities that have the mandate and resources to pursue these long-term goals. To support natural restoration and to enable management consistent with this long-term restoration, the Council has increasingly directed funds toward research that provides information that is critical to monitor and support the healthy functioning of the spill ecosystem.

Recovered: Recovery objectives have been met, and the current condition of the resource is not related to residual effects of the oil spill.

Recovery Unknown: For resources in the unknown category, data on life history or the extent of injury from the spill is limited. Moreover, given the length of time since the spill, it is unclear if new or further research will provide information that will help in comprehensively assessing the original injury or determining the residual effects of the spill such that a better evaluation of recovery can occur.

Recovering: Recovering resources are demonstrating substantive progress toward recovery objectives, but are still adversely affected by residual impacts of the spill or are currently being exposed to lingering oil. The amount of progress and time needed to attain full recovery varies depending on the species.

Not Recovering: Resources that are Not Recovering continue to show little or no clear improvement from injuries stemming from the oil spill. Recovery objectives have not been met.

Human Services: Human services that rely on natural resources were also injured by the oil spill and can thus be placed in one of the above categories. Because the recovery status of injured services is inextricably linked to the state of the resource on which it depends, full recovery of the spill area cannot occur until both resources and services are restored.

Very Likely Recovered: While there has been limited scientific research on the recovery status of these resources in recent years, prior studies suggest that there had been substantial progress toward recovery in the decade following the spill. In addition so much time has passed since any indications of some spill injury, including exposure to oil, it is unlikely that there are any residual effects of the spill.