Injury
Over 1,400 miles of coastline were oiled by the spill in Prince William Sound, on the Kenai and Alaska peninsulas, and in the Kodiak Archipelago. Heavy oiling affected approximately 220 miles of this shoreline. It is estimated that 40-45 percent of the 11 million gallons of crude oil spill by the Exxon Valdez washed ashore in the intertidal zone. For months after the spill in 1989, and again in 1990 and 1991, both oil and intensive clean-up activities had significant impacts on the flora and fauna of this environment. 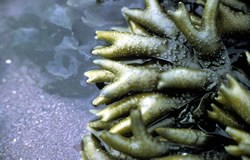 Initial impacts to the intertidal zone occurred at all tidal levels and in all types of habitats throughout the oil spill area. Direct assessment of the spill effects included sediment toxicity testing, documenting abundance and distribution of intertidal organisms and sampling ecological parameters of community structure. Dominant species of algae and invertebrates directly affected by the spill included common rockweed, speckled limpet, several barnacle species, blue mussels, periwinkles, and oligochaete worms. At lower elevations on gravel and mixed sand/gravel beaches, the abundance of sediment organisms and densities of clams declined. Large numbers of dead and moribund clams were documented on treated beaches, but these effects were likely due to a combination of oil toxicity and hot water washing. Intertidal fish were also affected. In a study conducted in different habitats, density and biomass of fish at oiled sites showed declines relative to reference sites in 1990.

Recovery Objective
Intertidal communities will have recovered when such important species as Fucus (marine algae/seaweed) have been reestablished at sheltered rocky sites, clams and mussels at soft or mixed sediment beaches are not contaminated by residual oil, the differences in community composition and organism abundance on oiled and unoiled shorelines are no longer apparent after taking into account geographic differences, and the intertidal and nearshore habitats provide adequate, uncontaminated food supplies for predators and subsistence users.

Recovery Status
By 1991, in the lower and middle intertidal zones, algal coverage and invertebrate abundances on oiled rocky shores had returned to conditions similar to those observed in unoiled areas. However, large fluctuations in the algal coverage in the oiled areas caused a subsequent alteration in community structure. The Fucus canopy was initially eliminated in most of the areas that underwent extensive cleaning, thereby removing the protection provided by this alga to intertidal organisms from predation, desiccation and abrasion. This early eradication of Fucus led to instability of this alga's subsequent populations because the single-aged stands present after recolonization of the habitat were susceptible to large synchronous die-offs. Until a broader distribution of mixed-aged stands is established, this cycle may continue for many generations. Meanwhile, full recovery of Fucus is crucial for the recovery of intertidal communities at oiled sites, because many intertidal organisms depend on the shelter this seaweed provides.

As of 1997, Fucus had not yet fully recovered in the upper intertidal zone on shores oriented towards direct sunlight, but in many locations, recovery of intertidal communities had been substantial. In other habitat types, such as estuaries and cobble beaches, many species did not show signs of recovery when they were last surveyed in 1991. Studies on the effects of clean-up activities on oiled and washed beaches showed some invertebrates, like molluscs and annelid worms were still much less abundant than on comparable unoiled beaches through 1997. It is undetermined how much recovery has occurred in these locations since 1997, because further work has not been conducted.

Lingering oil is still present in some intertidal areas within the spill zone. Recent studies indicate that at beaches with pockets of buried lingering oil, high amphipod mortality is associated with elevated hydrocarbon concentrations. Moreover, the recovery objective states that the intertidal zone must provide uncontaminated food to top predators, including human subsistence users. As recently as 2009, some bird species which rely exclusively on the intertidal zone (harlequin ducks) were still being exposed to hydrocarbons. Although the route of oil exposure has not been established, it is possible they are consuming contaminated prey during feeding. In addition, the slow recovery of some soft-sediment intertidal invertebrates, the presence of lingering, bioavailable oil, the continuing oil exposure of obligate intertidal foragers that are known to eat bivalves, and the lack of recent data characterizing the intertidal community indicate that this resource has not fully recovered from the effects of the oil spill.