The EVOSTC Long-Term Research Programs: Supporting a Leap in Knowledge

In 1991, the Trustee Council was formed to restore Prince William Sound and the Gulf of Alaska to the "healthy, productive, world-renowned ecosystem" that existed before the spill. The Trustee Council recognized that there was little direct intervention that could be done, such as rearing and releasing seabirds. In an effort to protect habitat important to injured species, they developed a habitat protection program that purchased lands or established conservation easements. Recognizing that the sea cannot be protected through acquisitions, another strategy for long-term protection was adopted, using research and monitoring to increase knowledge of the injured species. The resulting knowledge was used to develop tools to support sound management decisions for the health of those populations and the people who depend on them. 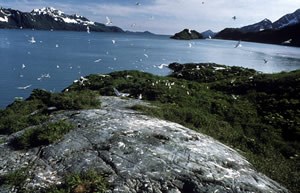 Since the Exxon Valdez settlement in 1991, hundreds of peer-reviewed research, monitoring, and general restoration projects have been completed. The magnitude of the restoration program has resulted in a leap in knowledge about the marine environment. It has established baseline information for many species that was not available before the spill as well as significant improvements in the tools that fish and wildlife managers use to evaluate the populations of injured species.

This gain in scientific knowledge and practical management tools is of increasing value in light of the accelerated effects of climate change in Alaska. Specifically, the additional knowledge gained through these projects assists in detecting and tracking vital oceanographic and atmospheric changes, and has greatly contributed to the development of adaptive management strategies and tools to deal with this rapidly changing marine ecosystem.

Moving into the Future: From the 2009 Twentieth Anniversary to the Long-Term Research and Monitoring Programs

In 2009, the Council marked the Twentieth Anniversary of the spill. This landmark anniversary included exhibits, coordination with aquariums, museums, zoos and other organizations, public meetings and presentations by EVOS scientists, a public event which attracted more than 1,200 participants and the issuance of a short film and a retrospective 2009 Annual Report. Local, national and international media submitted hundreds of information and interview requests to the Council and ARLIS offices.

The Anniversary also brought the Council together to discuss the future of their restoration activities and how best to manage the diminishing funds. During this process, the Council acknowledged that the remaining joint trust funds are limited and that is it becoming increasingly difficult to distinguish between spill impacts and other effects in measuring recovery. Recognizing this, they began to work toward a strategic and organized transition to a more modest restoration program which would focus the remaining funds on a few specific programs and reduce administrative costs. Under this approach, the Council expends funds with an emphasis on producing information to support the future management and natural restoration of the injured species and, thus, the human services that depend upon them. In addition, the information produced can enable management consistent with long-term restoration. To make restoration funds available to support this effort, the Council dramatically reduced its administrative budget, staffing and office space during 2009- 2011.

In 2010, to further this effort, the Council issued a Notice of Intent, resulting in a final EIS, summarizing its proposals and subsequently held public meetings in six spill-area communities to encourage public comment. Throughout this deliberative process, the Council and its staff consulted with scientists, Trustee Agency Liaisons, legal counsel, the Council's Public Advisory Committee, and reviewed numerous public comments received through the public meetings and those submitted directly to the Council. The public, the Public Advisory Committee and the Council's scientific advisors reviewed these proposals for a more modest program and provided strong support for the effort. As a result of these discussions, the Council narrowed and refined the scope of their efforts to five defined restoration categories:

In spring 2011, the Council issued an Invitation requesting projects in the following focus areas: a long-term herring program; a long-term program for the monitoring of marine conditions and injured natural resources; projects in harbor protection, marine restoration and lingering oil. Many excellent proposals were submitted in response to the Invitation, including collaborations among local and other entities working together in several areas, including establishing comprehensive long-term herring and monitoring programs. In the fall of 2011, the Council approved projects in these focus areas, including a long-term Herring and a Long-Term Monitoring program. Their approval marked the beginning of a new stage for the Council, defined by reduced administrative costs and an emphasis on supporting the focus areas.

In February 2012, funding commenced for the two long-term Programs: the Herring Research and Monitoring Program and the Long-Term Monitoring Program, also known as GulfWatch Alaska. The Programs are administrated under five-year contracts, which include annual Council and Public Advisory Committee meetings to review the past-year's results and future year's requested funding. The current Council contemplates the Programs to be twenty-years in length, concluding in 2032.