The Council has classified the Prince William Sound (PWS) population of Pacific herring (Clupea pallasi) as a resource that has not recovered from the effects of the 1989 oil spill. The PWS herring population was increasing prior to 1989 with record harvests reported just before the spill. The 1989 year class was one of the smallest cohorts to join the spawning adults recorded and by 1993 the fishery had collapsed with only 25 percent of the expected adults returning to spawn. The PWS fishery was closed from 1993 to 1996, but reopened in 1997 and 1998, based on an increasing population. Numbers again declined in 1999, and the fishery remains closed today. The 1993 collapse can be explained by several competing hypotheses; however, data uncertainty makes it unlikely that the reasons will be fully understood.

The Council recognizes the uncertainty of the role of the 1989 spill in the current and ongoing depressed state of the PWS herring population. However, herring are considered a keystone species in the marine ecosystem and play a vital role in the food chain of many injured species. Thus, rebuilding the herring population has the potential to support the restoration of these injured species. 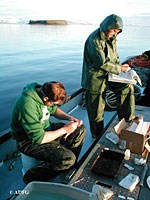 In April 2006, prompted by public comments about the continuing impacts to communities and commercial fishermen from herring losses, the Council convened scientists and researchers, commercial and subsistence fishermen, and natural resource managers for a herring workshop. One of the most important outcomes of the workshop was reaching consensus that a long-term strategic herring restoration program was needed if viable herring recovery activities were to be implemented. From 2006 to 2008, Council representatives met with natural resource managers, commercial fishers, scientists, the Public Advisory Committee (PAC), and Alaska Native residents of spill-area communities to gain sufficient input to draft a cost-efficient, scientifically credible, and coordinated program, the Integrated Herring Restoration Program (IHRP). The goal of the IHRP was to determine what, if anything, can be done to successfully restore PWS herring; to determine what steps can be taken to examine the reasons for the continued decline of herring in the Sound; to identify and evaluate potential recovery options; and to recommend a course of action for restoration.

In 2010, the Council adopted the final version of the IHRP, which outlined herring research projects, known limiting factors, and potential restoration options. The Council determined that Restoration Option #2, Enhanced Monitoring, was the preferred option and a long-term herring program proposed in this area was designed by the Prince William Sound Science Center to address this option.

From 2012 and Looking Forward: The Herring Monitoring and Research Program

The Herring Monitoring and Research Program provides critical information, such as evaluations of recruitment, trends in disease, how ocean conditions affect recruitment, and relative productivity of various nursery bays. Research may also lead to a better understanding of the role of disease, predictability of disease outbreaks, and potential disease management practices that reduce disease impacts. Monitoring of herring populations, quantification and measurement of critical life-history attributes will allow for the development of better predictive models of herring stocks that lead to adaptive fisheries management practices, and longer-term sustainability of the stock. This supportive information can then be used if active intervention were to be implemented in the future.

The Herring Monitoring and Research Program is administrated with a five-year contract through NOAA. Under this contract, the Trustee Council reviews annual proposal requests for the next year's funding.

Annual Reports are submitted on March 1 of each year.