Questions and Answers about the Spill

Where is the Exxon Valdez today?
After several changes of name and ownership, the tanker was converted for hauling bulk ore in the South China Sea. Following a collision with a cargo ship in November 2012, the ore carrier was sold, again renamed, and then resold for scrap and routed to India. A court dispute to prevent the ship from being beached in India was resolved when the Supreme Court of India granted permission to the owners to beach the ship for dismantling. The former T/V Exxon Valdez was beached on August 2, 2012. For more details, see After the Big Spill, What Happened to the Ship Exxon Valdez? at the NOAA website.

How did the accident happen?
The National Transportation Safety Board investigated the accident and determined that the probable causes of the grounding were:

Okay. But what actually happened?
The Exxon Valdez departed from the Trans Alaska Pipeline terminal at 9:12 pm March 23, 1989. William Murphy, an expert ship's pilot hired to maneuver the 986-foot vessel through the Valdez Narrows, was in control of the wheelhouse. At his side was the captain of the vessel, Joe Hazelwood. Helmsman Harry Claar

Can I have more detail, please?
Here's a detailed account of the accident as reported by the Alaska Oil Spill Commission in its 1990 Final Report.

Was the captain drunk?
The captain was seen in a local bar, admitted to having some alcoholic drinks, and a blood test showed alcohol in his blood even several hours after the accident. The captain has always insisted that he was not impaired by alcohol. The state charged him with operating a vessel while under the influence of alcohol. A jury in Alaska, however, found him NOT GUILTY of that charge. The jury did find him guilty of negligent discharge of oil, a misdemeanor. Hazelwood was fined $50,000 and sentenced to 1,000 hours of community service in Alaska (State of Alaska v. Hazelwood). He completed the community service ahead of schedule in 2001. He picked up trash along the Seward Highway and worked at Bean's Cafe, a "soup kitchen" for the homeless in Anchorage, Alaska.

What's being done to prevent another Exxon Valdez-type accident?
See the Spill Prevention and Response page for a thorough answer.

How much oil was spilled?
Approximately 11 million gallons or 257,000 barrels or 35,000 metric tonnes (38,800 short tons). Picture the swimming pool at your school or in your community. The amount of spilled oil is roughly equivalent to 17 olympic-sized swimming pools.

How does the Exxon Valdez spill compare to other spills?
The Exxon Valdez spill, though still one of the largest ever in the United States, has dropped from the top 50 internationally (view a list of top oil spills worldwide). It is widely considered the number one spill worldwide in terms of damage to the environment, however. The timing of the spill, the remote and spectacular location, the thousands of miles of rugged and wild shoreline, and the abundance of wildlife in the region combined to make it an environmental disaster well beyond the scope of other spills.

How large an area did the spill cover?
From Bligh Reef the spill stretched 460 miles to the tiny village of Chignik on the Alaska Peninsula.

View a map of the spill

How was the spill cleaned up?
Complicated question. It took more than four summers of cleanup efforts before the effort was called off. Not all beaches were

cleaned and some beaches remain oiled today. At its peak the cleanup effort included 10,000 workers, about 1,000 boats and roughly 100 airplanes and helicopters, known as Exxon's army, navy, and air force. It is widely believed, however, that wave action from winter storms did more to clean the beaches than all the human effort involved.

How much did it cost?
Exxon says it spent about $2.1 billion on the cleanup effort.

What techniques were used?
TIP: Check out National Geographic, January 1990, Pages 18-19 for a great illustration on how shoreline cleanup was conducted.

Hot water treatment was popular until it was determined that the treatment could be causing more damage than the oil. Small organisms were being cooked by the hot water. 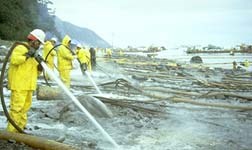 High pressure cold water treatment and hot water treatment involved dozens of people holding fire hoses and spraying the beaches. The water, with floating oil, would trickle down to the shore. The oil would be trapped within several layers of boom and either be scooped up, sucked up or absorbed using special oil-absorbent materials.

Mechanical cleanup was attempted on some beaches. Backhoes and other heavy equipment would till the beaches to expose oil underneath so that it could be washed out.

Many beaches were fertilized to promote growth of microscopic bacteria that eat the hydrocarbons. Known as bioremediation, this method was successful on several beaches where the oil was not too thick. More information about bioremediation techniques used can be found on the EPA website.

A few solvents and chemical agents were used, although none extensively.

How many animals died outright from the oil spill?
No one knows. The carcasses of more than 35,000 birds and

1,000 sea otters were found after the spill, but since most carcasses sink, this is considered to be a small fraction of the actual death toll. The best estimates are: 250,000 seabirds, 2,800 sea otters, 300 harbor seals, 250 bald eagles, up to 22 killer whales, and billions of salmon and herring eggs.

How are the animals doing now?
Lingering injuries continue to plague some injured species while others are fully recovered. See the Status of Injured Resources section of this web site.

Other useful websites that may help answer this question:

How does oil harm birds and mammals?
TIP: Check out National Geographic, January 1990, Page 26-27 for a great illustration on how oil affects the fur and feathers of wildlife.

How were the oiled birds and sea otters cleaned?
A professional team and dozens of volunteers, including veterinarians, set up a cleaning facility and recovery facility. Dawn® dishwashing detergent was the cleaning agent of choice.