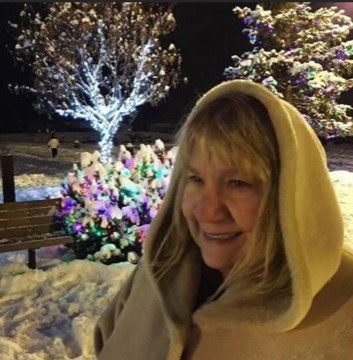 Cherri Womac, long-time member of the EVOSTC team, passed away on December 27, 2020. Cherri was one of the first official EVOSTC employees. She was hired in 1993 as part of the contractor team the Department of Justice had hired during the EVOS litigation. She took the bus in from Eagle River every day and was known for her rock-solid reliability, arriving promptly in the office each day and lending her elegant and warm presence to the work day.

A paralegal by training, Cherri held several positions while at EVOSTC: she was initially hired in January 1994 as an Administrative Assistant II, in August 2004 she became an Administrative Officer and she transitioned to an Associate Coordinator in April 2008, which she held until her passing. Cherri was also awarded the Denali Award in 2007 for her outstanding service as a "Customer Service Team Honorable Mention.”

Cherri was the center of all EVOSTC information and history due to her long tenure and her careful observations of the workings of the Council over decades. EVOSTC decisions large and small were improved with her always-diplomatic suggestions based on her extensive experience and Council knowledge.

Cherri also handed all the communications among the Council and the many agencies and entities that make up and interact with EVOSTC. She was particularly skilled in identifying and addressing the specific informational needs of the recipient. Cherri took extra care to be thorough and provide each detail that was actually needed.

Cherri’s skills were also of great importance to her administration of the Public Advisory Committee (PAC).  Unfailingly patient and caring, PAC members were introduced and shepherded through the various processes and documents with Cherri’s steady hand. Council meetings also ran smoothly and on-schedule with the benefit of the many days and weeks of Cherri’s detailed preparation of every aspect, from esoteric document details to practical issues.

Cherri Womac was an exceptional and gracious colleague to any of those lucky enough to work with her over her 27 years with the Council. She was literally the backbone of EVOSTC and generations of Councils owe their smooth office functioning and high standard of responsiveness and accuracy to her fine work skills and ethic.  Cherri elevated the Council’s work in every way and she is dearly missed.

I first met Cherri when I started a new position as Operations Director for the Exxon Valdez Oil Spill Trustee Council, in November 1993. Cherri was one of a team of contractors hired by the Department of Justice to manage all of the legal documents during the litigation phase following the spill.  Up until that time all of the staff working for the Trustees were either contractors or detailees from one of the six trustee agencies.

In 1993 the Trustee Council took a different direction by hiring a professional staff that worked for all six trustees, led by an Executive Director. The first ED was Jim Ayers, who hired me as Operations Director based in Anchorage. This required me to move with my family (husband and two young sons) from Juneau to Anchorage in January 1994. Jim and I organized the office so that we were all state employees housed within the Alaska Department of Fish and Game, reporting to the Trustee Council.

One of our first tasks was to significantly scale back the number of contractors and decide who would staff the new office. It was a no-brainer that Cherri would be among that group. In just a few weeks she had proven herself to be an indispensable employee – reliable, consistent, always willing to go the extra mile to make our operations work well.

I became Executive Director of the Trustee Council in late 1994 and held that position for nearly 10 years, working closely with Cherri over that time. She always had good ideas as we responded to the changing needs of the Trustee Council, which involved numerous council meetings, public hearings, and support for a large Public Advisory Committee.  I never saw her lose her temper or get flustered – unlike me! She was always calm and remained kind and patient with everyone, and especially members of the public who weren’t always easy to deal with.

We were family in that office. We watched our kids grow up – and I turned to Cherri for advice frequently since her kids were older than mine. She was always happy to share. When I moved on to another organization, we saw each her infrequently. But the bond was always strong and when we did see each other, she never failed to ask after my family. Her passing is a huge loss.