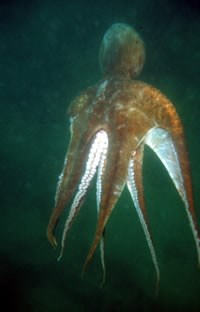 Injury
Subtidal habitats encompass all of the seafloor below the mean lower low water tide line to about 800 meters, although deeper habitats are often referred to as the deep benthos. For purposes of this List and evaluating oil spill effects, the impacted subtidal zone generally ranges from the lower intertidal zone to a depth of about 20 meters. Communities in the near subtidal areas are typically characterized by dense stands of kelp or eelgrass and comprise various invertebrate species, such as amphipods, polychaete worms, snails, clams, sea urchins and crabs. Subtidal habitats provide shelter and food for an array of nearshore fishes, birds, and marine mammals.

It is estimated that up to 13 percent of the oil that was spilled deposited in the subtidal zones. The direct toxicity of the oil, as well as subsequent clean-up activities caused changes in the abundance and species composition of plant and animal populations below lower tides. Initial injuries were evident for several oil-sensitive species. Infaunal amphipods, a prominent prey species in subtidal communities, were consistently less abundant at oiled than at unoiled sites. Reduced numbers of eelgrass shoots and flowers were also documented and may have resulted from increased turbidity associated with clean-up activities. Two species of sea stars and helmet crabs also were less abundant at oiled sites when compared to oiled areas. However, stress tolerant organisms, including polychaete worms, snails and mussels were more abundant at oiled sites. It has been suggested that these species may have benefited from organic enrichment of the area from the oil or from reduced competition or predation because ot her, more sensitive species were depleted.

Recovery Objective Subtidal communities will have recovered when community composition in oiled areas, especially in association with eelgrass beds, is similar to that in unoiled areas or consistent with natural differences between, sites such as proportions of mud and sand, and that the subtidal community and sediments found within are no longer contaminated by lingering oil.

Recovery Status Invertebrate assemblages within eelgrass beds and adjacent areas of soft sediment, were compared at oiled and unoiled sites from 1990-1995. It was hypothesized that reduction in eelgrass and kelp could alter the habitat structure of subtidal communities and continue to impact resident species because food and shelter resources were removed from the environment. By 1995, some benthic species within eelgrass habitats of the oiled areas had recovered. However, important species such as amphipods, certain bivalves, crabs and sea stars were not as abundant at oiled sites as they were in unoiled areas. It was difficult to interpret the findings of these studies, because it was not possible to distinguish between natural conditions and differences in habitat characteristics caused by the spill or subsequent clean-up activities.

More recently, a census of marine life throughout the Gulf of Alaska measured biodiversity indices of plants and animals in the intertidal and shallow subtidal zones. Measurements of species abundance, richness and evenness were compared among areas in Prince William Sound, Kodiak Island and Kachemak Bay. Generally, community structure was significantly different between intertidal and subtidal areas with intertidal communities comprising more species and being more variable than subtidal communities. However, direct comparisons between oiled and unoiled sites were not evaluated for each community, and comparisons in these communities at a smaller scale are not known.

Concentrations of oil in subtidal areas declined by 1995, but were still slightly elevated over unoiled sites. In 2001, at a few random sites adjacent to heavily or moderately oiled intertidal areas, little or no oil was found in the subtidal sediments. However, a systematic sampling of sediments from subtidal areas in the entire spill zone has not been conducted.

In the early 1990's, several benthic organisms using the subtidal zones showed trends towards recovery, and hydrocarbon concentrations had declined in many areas. However, consistent, systematic surveys have not been conducted for many species. Given the length of time since evidence of injury was last documented, the lack of subtidal oil for many years, and the resiliency and short generation times for the species that had shown lower populations in the oiled areas, it seems likely that recovery has occurred.

Subtidal communities are VERY LIKELY RECOVERED. In addition, further study, with sufficient effort and scope to achieve powerful tests of the impacts of lingering oil, would be relatively expensive and unlikely to definitively demonstrate an effect of the oil spill on this resource.