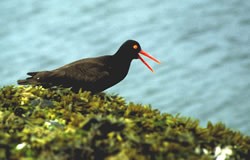 Injury
Black oystercatchers spend their entire lives in or near intertidal habitats and are highly vulnerable to oil pollution. They are fully dependent on the nearshore environment and forage exclusively on invertebrate species along shorelines. It was estimated at the time of the Spill that 1,500-2,000 oystercatchers breed in south-central Alaska. Only nine carcasses of adult oystercatchers were recovered following the Spill, but the actual number of mortalities may have been several times higher.

Recovery Objective
Black oystercatchers will have recovered when the population, reproduction and productivity have reached levels that would have existed without the spill. An increasing population trend and comparable hatching success and growth rates of chicks in oiled and unoiled areas, after taking into account geographic differences, will indicate that recovery is underway.

Recovery Status
Black oystercatchers are long-lived (15+ years) and territorial, occupying nests in rocky areas close to the intertidal zone and returning in successive years to nest again in the same vicinity. In the early 1990s, elevated hydrocarbons in feces were measured in chicks living on oiled shorelines. Deleterious behavioral and physiological changes including lower body weights of females and chicks were also recorded. Because foraging areas are limited to a few kilometers around a nest, contaminations of mussel beds in the local vicinity was thought to provide a source of exposure. In 1998 the Trustee Council sponsored a study to reassess the status of this species in Prince William Sound. The data indicated that oystercatchers had fully reoccupied and were nesting at oiled sites in the Sound. The breeding phenology of nesting birds was relatively synchronous in oiled and unoiled areas, and no oil-related differences in clutch size, egg volume, or chick growth rates were detected. However, a higher rate of nest failure occurred on oiled Green Island: at the time this was thought to be the result of predation, not lingering effects of oil. Because the extent of shoreline with persistent contamination was limited and lingering oil was patchy, it was concluded that the overall effects of oil on oystercatchers in the Sound had been minimal. However, the reasons that predation was higher at oiled Green Island than at Montague were not investigated. It is not clear whether predation was higher because there were higher numbers of predators, lower number of nests initiated or a behavioral change in the parents that would have led to lower nest protection. There have been no further studies of hatching success of black oystercatchers in Prince William Sound since this study.

Based on this study and one year of boat-based surveys (2000) of marine birds in Prince William Sound indicating that there were increases in numbers of oystercatchers in both the oiled and unoiled areas for that year, the black oystercatcher was identified as recovered. A long-term (1989- 2007) evaluation of marine bird population trends suggested that populations of black oystercatchers in the Sound may not have recovered to conditions had the Spill not occurred, making the recovered designation premature and their status was changed to recovering in the 2010 Update. Surveys through 2012 have shown a stable population trend.

Further, oil exposure to oystercatchers was documented in 2004 using a biochemical marker of exposure, cytochrome P450IA. However, no studies since 2004 have documented continuing oil exposure.