Sea otters were originally found throughout the north Pacific including Japan, Russia, the United States, Canada and Mexico. By the late 1800s, they had been eliminated from most of their range due to over-harvest by fur traders. Sea otters came under international protection in 1911 and since then, their numbers have rebounded. Today, sea otters can only be harvested for subsistence purposes. Surveys of sea otters in the 1970s and 1980s indicated a healthy and expanding population in most of Alaska, including Prince William Sound.

More than a thousand otters became coated with oil in the days following the Spill, and 871 carcasses were collected throughout the Spill area. Estimates of the total number of sea otters lost to acute mortality vary, but range as high as 40 percent (2,650) of the approximately 6,500 sea otters inhabiting the western areas of the Sound. In 1990 and 1991, higher than expected proportions of prime-age adult sea otters were found dead in western Prince William Sound (PWS). Higher mortality of recently weaned juveniles in oiled areas was documented through 1993. Continuing studies of mortality rates, based largely on sea otter carcass recoveries, suggest that relatively poor survival of otters in the oiled area persisted for well over a decade.

Recovery Objective
Sea otters will have recovered when the population in oiled areas returns to conditions that would have existed had the Spill not occurred and when biochemical indicators of hydrocarbon exposure in otters in the oiled areas are similar to those in otters in unoiled areas. An increasing population trend and normal reproduction and age structure in western Prince William Sound will indicate that recovery is underway.

Recovery Status
No apparent population growth occurred for Prince William Sound sea otters through 1991. After 1993, the population in the western Sound began increasing at a rate approximately one-half of the pre-Spill rate of increase. From 1993-2000, the number of otters increased by 600 animals which represents an annual growth rate of 4 percent. However, in areas that were heavily oiled, such as northern Knight Island, sea otter populations remained well below pre-Spill numbers, and population trends continued to decline through 2010. Moreover, the demographics within this group apparently were not stable as many of the females are below reproductive age and young, non-territorial males moved into and out of the population 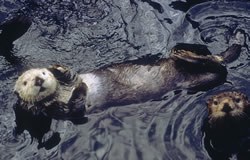 However, the aerial surveys in 2013 indicated that population abundance in Prince William Sound have converged in oiled and unoiled areas. The estimated number of sea otters more than doubled relative to the 1993 estimate and the increase over that time frame was greater to or similar to estimates of sea otters that died within the first years of the Spill. The 2013 surveys indicated that the sea otter population at heavily-oiled northern Knight Island, where abundance was depressed for two decades after the Spill, had finally reached pre-Spill levels.

Starting in 2011, there was a distinct change in the age-class proportions of dying sea otters, with a return to the pre-Spill pattern of predominantly young and older sea otters recovered as carcasses. This pattern continued in 2012 and 2013, which may be interpreted as evidence that from 2011 - 2013, chronic exposure to lingering oil and/or chronic effects due to previous exposure abated to the point where they are no longer factors constraining survival.

Overall, the current population level data for sea otters in PWS are consistent with the EVOSTC definition of recovery for sea otters from the long-term injury incurred in the wake of the 1989 oil Spill. The support for this is based primarily on demographic data, including (1) a return to estimated pre-Spill abundance of sea otters at northern Knight Island, a heavily-oiled area within PWS, and (2) a return to pre-Spill mortality patterns based on ages-at-death. Gene transcription rates in 2012 were similar in sea otters from oiled, moderately-oiled and unoiled areas, suggesting abatement of exposure effects in 2012. However, because 2012 gene transcription rates generally were low for sea otters from all areas relative to 2008, these observations cannot be fully interpreted without data from a wider panel of genes. This slight uncertainty with respect to the data from the biochemical indicator is outweighed by the strength of the data for the demographic indicators. The return to pre-Spill numbers and mortality patterns suggests a gradual dissipation of exposure to lingering oil over the past two decades, to the point where continuing exposure is no longer of biological significance to the PWS sea otter population.

Therefore, sea otters are considered to be recovered.