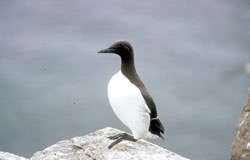 Injury
About 30,000 carcasses of oiled birds were picked up in the first four months following the oil spill, and 74 percent of them were common and thick-billed murres (mostly common murres). Many more murres probably died than actually were recovered. Based on surveys of index breeding colonies at such locations as the Barren Islands, Chiswell Islands, Triplet Islands, Puale Bay, and Ugiaushak Island, the spill area populations may have declined by about 40 percent following the spill. In addition to direct losses of murres, there is evidence that the timing of reproduction was disrupted and productivity decreased. Interpretation of the effects of the spill, however, is complicated by incomplete pre-spill data and by indications that populations at some colonies were in decline before the oil spill.

Recovery Objective
Common murres will have recovered when populations at index colonies have returned to pre-spill levels and when reproductive success (productivity) is sustained within normal bounds. Increasing population trends at index colonies will be an indication that recovery is underway.

Recovery Status
Post-spill monitoring at the breeding colonies in the Barren Islands indicated that productive success was within normal bounds by 1993, and it has stayed within these bounds each breeding season since then. During the period 1993-1997, the murres nested progressively earlier by two to five days each year, suggesting that the age and experience of nesting birds were increasing, as might be expected after a mass mortality event. By 1997, the numbers of murres at the Barren Island had increased, probably because three- and four-year old non-breeding sub-adult birds that were hatched there in 1993 and 1994 were returning to their natural nesting colony. Although counts were low in 1996, the counts in 1997 at this index site brought the colony size to pre-spill levels.

The population size coupled with normal reproductive success (productivity), indicate that RECOVERY HAS BEEN ACHIEVED for common murres.