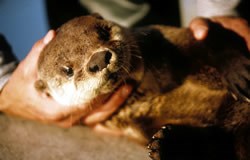 Injury
River otters have a low population density in Prince William Sound. Twelve river otter carcasses were found following the spill, but the actual total mortality is not known. Studies conducted during 1989-91 identified several differences between river otters in oiled and unoiled areas in the Sound, including biochemical alterations, reduced body size, and increased home-range size. The lack of comparable pre-spill information precluded any effort to determine if these differences were the result of the oil spill.

Recovery Objective
The river otter will have recovered when biochemical indicators of hydrocarbon exposure or other stresses and indices of habitat use are similar between oiled and unoiled areas of Prince William Sound, after taking into account any geographic differences.

Recovery Status
Although some of the differences (e.g., values of blood characteristics) between river otters in oiled and unoiled areas in Prince William Sound were apparent through 1996, they did not persist in 1997 and 1998.

In 1999, the Trustee Council considered river otters to be RECOVERED, because the recovery objectives had been met and indications of possible lingering injury from the oil spill were not present.