Injury
Harbor seal numbers were declining in the Gulf of Alaska, including in Prince William Sound, before the oil spill. Exxon Valdez oil affected harbor seal habitat, including key haul-out areas and adjacent waters, in Prince William Sound and as far away as Tugidak Island, near Kodiak. Estimated mortality as a direct result of the oil spill was about 300 seals in oiled parts of Prince William Sound. In some parts of the Sound, 80 percent of the seals had oil on them in May 1989 and remained oiled until their molt in August. Some of the haul-out sites were oiled through the pupping season, and many pups became oiled shortly after birth. Based on aerial surveys conducted at trend-count haulout sites in central Prince William Sound before (1988) and after (1989) the oil spill, seals in oiled areas declined by 43 percent, compared to 11 percent in unoiled areas.

Recovery Objective
Harbor seals will have recovered from the effects of the oil spill when their population is stable or increasing.

Recovery Status
Harbor seal populations in the Sound were declining before the oil spill and the decline continued after the spill occurred. Factors contributing to this decline may involve environmental changes that occurred in the 1970's in which the amount and quality of prey resources were diminished. It is possible that the changes in the availability of high quality forage fish such as Pacific herring and capelin altered the ecosystem such that it may now support fewer seals than it did prior to the late 1970's. Other sources of mortality that may be contributing to lower seal numbers could include predation, subsistence hunting, and commercial fishery interactions (e.g., entanglement and drowning in nets). 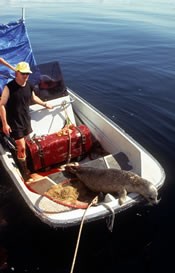 Satellite tagging studies sponsored by the Trustee Council and genetic studies carried out by the National Marine Fisheries Service indicate that harbor seals in the Sound are largely resident throughout the year and have limited movement and interbreeding with other subpopulations in the northern Gulf of Alaska. This suggests that recovery must come largely through recruitment and survival within resident populations.

Based on annual counts from haulouts concentrated in the south-central region of the Sound, seal numbers stabilized from 1996-2005 and likely increased between 2001-2005. From 1990-2005, seal numbers at sites that were not oiled decreased at a greater rate than oiled sites, indicating no localized effects of the spill. However, the entire spill zone was not surveyed, and trends may have been influenced by movements of seals from oiled to unoiled sites after the spill and a return to more oiled sites in recent years. This hypothesis has not been studied directly.

Harbor seals are considered RECOVERED due to collective evidence from the last ten years indicating that harbor seal population numbers are stabilizing or increasing.