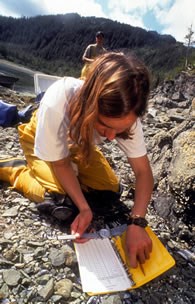 Injury
Clams are widely distributed throughout the oil Spill area. They can be found in a variety of substrates and are most abundant in the lower intertidal and shallow subtidal zones. Clams are important prey for various fish and wildlife resources including sea otters and some sea birds.

The magnitude of the immediate impacts of oil on clam populations varied depending on species of clam, degree of oiling and location. Although direct mortality of some clam species like littlenecks and butter clams were assessed for several years after the Spill, other more sensitive species, (e.g., Macoma and Mya spp) were not the focus of much study, and the immediate impact of the oil to these species remains unknown. In 1990 and 1991, growth of littleneck clams at oiled sites was less than at reference sites, and growth rate was directly proportional to hydrocarbon concentrations. Additionally, mortality was higher and growth rates lower in clams transplanted from clean areas to oiled areas, five to seven years after the Spill.

Cleanup technologies, including hot water, high pressure washing, manual and mechanical scrubbing and physical removal of oiled sediments, were detrimental to clam populations. Hot water washing caused thermal stress, oil dispersal into the water column, animal displacement and burial, and the transportation of fine grain sediment from the upper intertidal into the lower intertidal zone. Early assessments reported that cleanup activities resulted in reductions in clam abundance and distribution on treated (oiled-but-treated) beaches up to three years after the Spill.

Recovery Status
Studies have indicated that abundances of some species of clams were lower on treated beaches through 1996. Densities of littleneck and butter clams were depressed through 1997 on cleaned mixed-sedimentary shores where fine sediments had been washed down the beach during pressured water treatments.

As part of an investigation of sea otter populations conducted from 1996-1998, researchers compared clam densities between oiled sites on Knight Island and unoiled sites on Montague Island. They reported an increase in mean size of littlenecks and butter clams at Knight Island, where numbers of sea otters, a major predator of clams were significantly reduced. Absolute densities of littlenecks and butter clams were not different between oiled and unoiled sites; however, oiled sites had fewer juvenile clams and lower numbers of other clam species. In 2002, differences in species richness, diversity and abundance of several species were still measurable between cleaned (oiled and treated) and untreated (oiled but untreated) beaches. Moreover, as of 2005, several wildlife species that use the intertidal zone and feed on bivalves (e.g., harlequin ducks and sea otters) were still being exposed to oil.

Between 2002 and 2010, bivalve assemblages declined substantially in PWS. Recent (2012) studies indicate that the decline is in response to changes in regional conditions rather than the Spill or subsequent cleanup activities.

There are currently no differences in species richness, diversity and abundance between cleaned (oiled and treated) and untreated (oiled but untreated) beaches and no evidence of oil exposure in clam tissue samples. The recovery objectives have been met and clams are considered recovered.