Injury
More than 160 killer whales in eight resident (fish eating) pods regularly use Prince William Sound/Kenai Fjords as part of their ranges. Transient (marine mammal eating) groups are observed in the Sound less frequently, but some (the AT1 population) use the Sound year-round. After the Spill, the loss of individual whales from the resident AB pod was of particular concern. At the time of the Spill, this group numbered 36 animals, and from 1989-1990, fourteen whales disappeared. During that time no young were recruited into the population. Members of the transient AT1 population were also observed in the area of the Spill and adjacent to the tanker as it was leaking oil. Two stranded whales were found in 1990, but their cause of death was not determined. 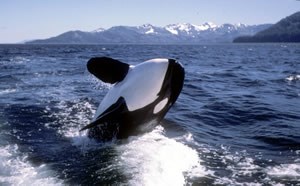 The original link between the AB pod losses and the oil Spill was largely circumstantial. No carcasses of any resident whales were discovered. However, whales were observed surfacing in Exxon Valdez oil slicks following the Spill in 1989 and nearly all of the deaths occurred at the time of the Spill or the following winter. It is likely that petroleum or petroleum vapors were inhaled by whales, and it is also possible that they ate contaminated fish. The mortality rate for the AB pod was 19 percent in 1989 and 21 percent in 1990, compared to an expected natural mortality rate of 2.2 percent or less.

The AT1 population appears to range only through Prince William Sound and the Kenai Fjords region. From 1984-1989, their numbers were stable at 22 regularly observed individuals, but in a retrospective analysis it was determined that nine whales disappeared shortly after the Spill. Because transients may occasionally leave their groups and swim with other transient whales, it could not be immediately determined if these whales were dead. However, in the subsequent 20 years these individuals were not seen by researchers with any other transient groups and they had not reappeared with their original group. Thus, they were considered deceased. It was hypothesized that these whales died from inhaling toxic oil vapors or as a result of eating oiled harbor seals. The timing and magnitude of missing individuals directly following the Spill and the fact that the ATI pod is a year-round resident of the Sound suggest that oil may have caused a decline immediately after the Spill.

Since 1989, a total of 15 of 22 whales have gone missing from the AT1 group and are now presumed dead (five of the carcasses were found on beaches). During that same period there has been no recruitment of calves into this genetically unique group of transients. The AT1 transients are a distinct population segment and considered depleted under the Marine Mammal Protection Act.

Recovery Objective
The recovery objective for killer whales is a return to a pre-Spill number of 36 for the AB pod and a stable population trend in the AT1 population.

Recovery Status
From 1990-1995 seven calves were born within the AB pod: however, additional mortalities occurred and by 2005, the number of whales was only 28. AB pod continues a slow recovery and in 1990 numbered 30 individuals, although the pod has now split and travels as two distinct units. Killer whales are long-lived and slow to reproduce. Female killer whales give birth about every five years, and are likely to produce only four to six calves throughout their life. Moreover, a disproportionate number of females were lost at the time of the Spill, and population modeling has demonstrated that the Spill impacted the AB pod primarily through the loss of young and reproductive females. Unexpected mortalities in the years since the Spill have also impacted this group. These factors indicate that the recovery rate of this population will continue to be slow. The AB pod is the only tracked pod that has experienced a decline following the Spill. Other pods have increased at an average rate of 3% per year. 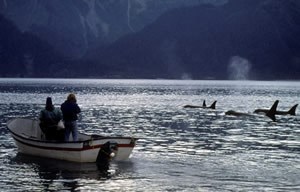 Transient killer whales, such as the AT1 population, largely prey on marine mammals, especially harbor seals. From data collected at haul-outs in the south-central region of the Sound, it appears that harbor seals numbers may have increased over the past five years. It is unclear how the population dynamics of harbor seal influence transient whale populations, but changes in the availability of such an important prey species could impact survival of individuals and reproductive success within groups. Research sponsored by the Trustee Council on contaminants in killer whales in the Sound indicates that individuals of the AT1 population are carrying elevated levels of PCBs, DDT, and DDT metabolites in their blubber. Although the presence of these contaminants is not related to the oil Spill, the high concentrations found in these transients are comparable to levels that cause reproductive problems in other marine mammals. Accordingly, it is likely that the population dynamics of this population are being influenced by factors other than residual oil which may further hinder their ability to rebound from the initial injury from the Spill.

Since 1990, the AB Pod females that survived EVOS have produced nearly as many calves as would be expected based on the number of females and their ages. The lack of recovery of AB Pod, thus, can be largely attributed to the loss of young adult females, which reduced the number of reproductive females by half, and by the loss of juveniles, such that fewer animals matured to replace the reproductive females that died. As a result, the annual birth rate in AB Pod since the EVOS has been about 70 percent the birth rate observed in other resident pods, which was significantly lower than expected, this pod is considered recovering. Full recovery can be expected over decades if recruitment rates remain positive and unexpected mortalities do not occur. The AT1 transient population of killer whales has remained stable at seven individuals with no recorded births or deaths since 2010 and is considered not recovering. Progress toward recovery appears unlikely as key breeding females have been lost and no new recruitment observed.