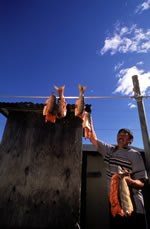 Injury
Fifteen predominantly Alaskan Native communities (with a total population of about 2,200 people) in the oil spill area rely heavily on harvests of subsistence resources, such as fish, shellfish, seals, deer, and waterfowl. Oil from the spill disrupted subsistence activities for the people of these villages and approximately 13,000 other subsistence permit holders in the area. Oil affected the subsistence harvests through a variety of mechanisms including reduced availability of fish and wildlife due to injury, concern about possible health effects of eating oiled fish and wildlife, and disruption of the traditional lifestyle due to clean-up and related activities.

Recovery Objective
Subsistence will have recovered when injured resources used for subsistence are healthy and productive and exist at pre-spill levels. In addition, there is recognition that people must be confident that the resources are safe to eat and that the cultural values provided by gathering, preparing, and sharing food need to be reintegrated into community life.

Recovery Status
After the spill, subsistence harvest declined between 9-77 percent in 10 villages within Prince William Sound, Cook Inlet and Kodiak. Villages in Tatitlek and Chenega reduced their harvest by 56 and 57 percent, respectively. Outside of the Sound, harvest declined in Akhiok (on the lee side of Kodiak Island) by nine percent, but by 77 percent in Ouzinkie, which is on the northern side of the island. The primary reason that harvest declined so dramatically was the fear that oil had contaminated the resources and made them unfit to eat.

Harvest levels have generally increased in many communities since the spill, but results of harvest surveys have been variable. By 2003, they were generally higher than pre-spill levels in the communities in Cook Inlet, but lower in Kodiak and Prince William Sound (except for Cordova). Even though the harvest levels in the PWS communities were not as high as pre-spill estimates, they were within the range of other Alaska rural communities. Harvest composition was also altered by the spill. In the first few years following the spill, people harvested more fish and shellfish than marine mammals because of the reduced number of marine mammals and the perception that these resources were contaminated and unsafe to eat.

Both safety concerns and the reduced availability of shellfish contributed to a decline in harvest levels. From 1989-94, subsistence foods were tested for evidence of hydrocarbon contamination, with no or very low concentrations of petroleum hydrocarbons found in most subsistence foods. However, concerns about oil contamination remained, and there was a belief that the increase in paralytic shellfish poisoning (PSP) was linked with Exxon Valdez oil. By 2003, most subsistence users expressed confidence in foods such as seals, finfish and chitons. However, the safety of certain shellfish, such as clams was still met with skepticism.

Subsistence use is a central way of life for many of the communities affected by the spill, thus the value of subsistence cannot be measured by harvest levels alone. The subsistence lifestyle encompasses a cultural value of traditional and customary use of natural resources. Following the oil spill, there was concern that the spill disrupted opportunities for young people to learn cultural subsistence practices and techniques, and that this knowledge may be lost to them in the future. In a 2004 survey of the spill area communities, 83 percent of respondents stated that their "traditional way of life" had been injured by the oil spill and 74 percent stated that recovery had not occurred. 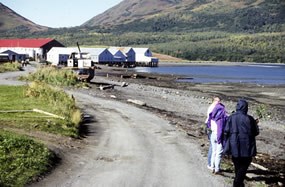 Many factors may contribute to the changes observed in subsistence harvests and the lifestyle surrounding this tradition. Demographic changes in village populations, ocean warming, increased competition for subsistence resources by other people (e.g., sport fishing charters), predators (e.g., sea otters), and increased awareness of PSP and other contaminants may play a role in resource availability, food safety, and participation in traditional practices.

Fears about food safety have diminished since the spill, but it is still a concern for some users. Additionally, harvest levels from villages in the spill area are comparable to other Alaskan communities. However, many subsistence resources injured by the spill, including clams and mussels, have still not recovered from the effects of the spill.

For these reasons, subsistence is considered to be RECOVERING from the effects of the oil spill.