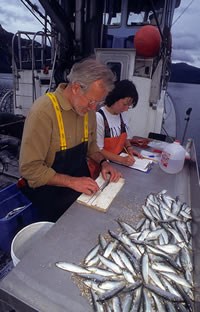 Injury
Pacific herring are an ecologically and commercially important species in the PWS ecosystem. They are central to the marine food web; providing food to marine mammals, birds, invertebrates and other fish. Herring are also commercially fished for food, bait, sac-roe and spawn on kelp.

Pacific herring spawned in intertidal and subtidal habitats in Prince William Sound shortly after the oil Spill. All age classes and a significant portion of spawning habitats and staging areas in the Sound were contaminated by oil. Juvenile and adult herring typically come to surface at night to feed and would have had increased exposure probability at this time. Lesions and elevated hydrocarbon levels were documented in some adult Pacific herring from the oiled areas. Laboratory studies showed abnormalities and possible depressed immune functions in Pacific herring exposed to oil. Egg mortalities and larval deformities were also documented in the 1989 year class, but population level effects of the Spill were never clearly established.

Prior to the Spill, herring populations in the Sound were increasing as documented by record harvests in the late 1980s. However, four years after the Spill a dramatic collapse of the fishery occurred, and the herring population has never rebounded. Herring populations are dominated by occasional, very strong year classes that are recruited into the overall population. The 1988 pre-Spill year-class of Pacific herring was large in Prince William Sound, and as a result, the estimated peak biomass of spawning adults in 1992 was high. Despite the expectation that this large spawning event would lead to high numbers of fish, the population exhibited a density-dependent reduction in size of individuals, and in 1993 there was an unprecedented crash of the adult herring population in PWS. The overall 1993 harvest was about 14 percent of the 1992 harvest, and the 1989 year class was one of the smallest cohorts ever to return as spawning adults.

Recovery Objective
The population of PWS Pacific herring will be considered recovered when the spawning biomass has been above the current regulatory fishery threshold of 23,000 tons for 6 to 8 years; two strong recruitments (> 220 million) of age-3 fish have occurred during those 6 to 8 years, and spawning occurs in at least three geographic regions of the Sound. 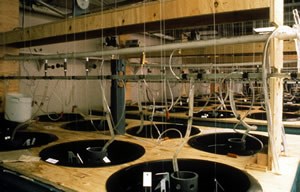 One of the factors currently limiting recovery of herring in the Sound appears to be disease. Two pathogens, a virus and a fungal infection are prevalent in herring populations among several age classes. Conditions which made herring susceptible to these two diseases (viral hemorrhagic septicemia and Icthyophonus hoferi infection) are unknown, but it appears they have been impacting herring for over a decade. While these diseases can occur at background levels, they do not usually impact fish populations for such a long duration.

Lingering oil exists in the Sound; however there does not appear to be much overlap between current herring spawning areas and sites known to harbor residual oil. In 2006, some herring spawn was observed in areas of the Sound that were oiled however, the spatial extent was limited, and this was the first year in decades that it has been reported. Therefore, it is not likely that lingering oil is directly affecting spawning adults, eggs or larvae.

Other factors may have contributed to the crash of 1993. Some evidence implies that zooplankton production in the 1990's was less than in the 1980's, thereby causing food to be limited at the time of a peaking population. This hypothesis is offered some support by the fact that the average size-at-age of herring had been decreasing since the mid-1980s as population numbers were rising. Poor nutrition may also increase susceptibility of herring to disease.

Predation also plays a role in herring population dynamics, as they are a primary forage fish within the Prince William Sound ecosystem. It is plausible that the small herring population is fighting an on-going disease problem and is further being kept in check by predators such as whales, seals, sea lions and seabirds.

Despite the pressures of predation and disease, ADF&G biomass forecasts in 2010, 2011 and 2012 exceeded the commercial fishing threshold of 22,000 tons. However, they did not provide a large enough harvestable surplus to allocate fish among all five herring fisheries: purse seine sac roe, gillnet sac roe, spawn-on-kelp not in pounds, spawn-on-kelp in pound fisheries, and herring food/bait fishery. Hindcasts from the 2013 forecast model for 2011 and 2012 were below the regulatory threshold with 2013 having the lowest mile-days of spawn in PWS since 1973.

A combination of factors, including disease, predation and poor recruitment appear to contribute to the continued suppression of herring populations in the Sound. No strongly successful year class has been recruited into the population and health indices suggest that herring in the Sound are not fit. However, the biomass has remained relatively stable over the past seven years but at a lower tonnage than can support a sustainable commercial fishery.

Pacific herring have not yet met their recovery objectives and are considered not recovering from the effects of the Spill.