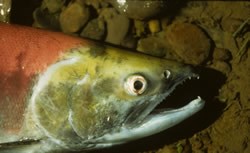 Injury
Commercial salmon fishing was closed in Prince William Sound and in portions of Cook Inlet and near Kodiak in 1989 to avoid the possibility of contaminated salmon being sold at market. As a result, there were higher-than-desirable numbers (i.e., "overescapement") of spawning sockeye salmon entering the Kenai River and Red and Akalura lakes on Kodiak Island. Initially, these high escapements produced an overabundance of juvenile sockeye that overgrazed the zooplankton, and altered planktonic food webs in the nursery lakes. As a result, growth rates were reduced during the freshwater stage of the salmon's life cycle, which led to a decline in returns of spawning adults. The net result was an initial loss of sockeye production.

Recovery Objective
Sockeye salmon in the Kenai River system and Red and Akalura lakes will have recovered when adult returns-per-spawner are within normal bounds. 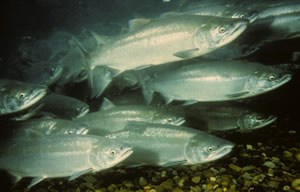 Recovery Status
Although sockeye freshwater growth tends to return to normal within two or three years following an overescapement event, there are indications that the populations are less stable for several years. The overescapement following the spill resulted in lower sockeye productivity, (as measured by return per spawner) in the Kenai River watershed from 1989-92. However, production of zooplankton in both Red and Akalura lakes on Kodiak Island quickly rebounded from the initial effects overgrazing. By 1997, Red Lake had responded favorably in terms of smolt and adult production and was at or near pre-spill production of adult sockeye. At Akalura Lake there were low juvenile growth rates in freshwater during the period 1989-92, and these years of low growth correspond to low adult escapements during the period 1994-97. Starting in 1993, however, the production of smolts per adult increased sharply and the smolt sizes and age composition suggested that rearing conditions had improved. It is possible that overescap ement also affected lakes on Afognak Island and on the Alaska Peninsula. However, analysis of sockeye freshwater growth rates of juveniles from Chignik Lake on the Alaska Peninsula did not identify any impacts associated with a 1989 overescapement event. On the basis of catch data through 2001 and in view of recent analyses of return per spawner estimates presented to the Alaska Board of Fisheries in 2001, the return-per-spawner in the Kenai River system is within historical bounds. Therefore, it is highly unlikely that the effects that reverberated from the overescapements in 1989 continue to affect sockeye salmon.

In 2002, this species was considered to be RECOVERED from the effects of the oil spill.