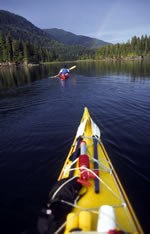 Injury
Recreation and tourism in the spill area dramatically declined in 1989 in Prince William Sound, Cook Inlet and the Kenai Peninsula. Injuries to natural resources led resource managers to limit access to hunting and fishing areas, and users such as kayakers were prevented from enjoying those beaches that harbored visible oil. Recreation was also affected by changes in human use in response to the spill, because areas that were unoiled become more heavily used as activity was displaced from the oiled areas.

Recovery Objective
Recreation and tourism will have recovered, in large part, when the fish and wildlife resources on which they depend have recovered, and recreation use of oiled beaches is no longer impaired.

Recovery Status
Recreation and tourism accounted for 26,000 jobs, generated $2.4 billion in gross sales and contributed $1.5 billion to Alaska's economy in 2003. The number of visitors to Alaska has increased in the years since the spill and it is expected that the recreation and tourism industry in south-central Alaska will grow approximately 28 percent per year through 2020. By 2001, over $10 million had been spent on repair and restoration of recreational facilities in the spill area, and damage caused by the spill or clean-up efforts at the Green Island cabin and Fleming Spit campsites were repaired.

Telephone interviews conducted in 1999 and 2002 of people who used the spill area for recreation before and after the spill, indicated that, although oil remained on beaches, it did not deter them from using the area. However, they continued to report diminished wildlife sightings in Prince William Sound, particularly in heavily oiled areas such as around Knight Island. They also reported seeing fewer seabirds, killer whales, sea lions, seals, and sea otters than were generally sighted before the spill, but also reported observing increases in the number of seabirds over the last several years. Key informants with experience along the outer Kenai coast reported diminished sightings of seabirds, seals, and sea lions. However, they indicated that the possible presence of residual oil has no effect on recreational activities along the outer Kenai coast, the Kodiak Archipelago, and the Lake Clark and Katmai national park coastlines. Changes in the amount of wildlife observed could be due to a variety of fact ors, including the spill.

Recreation and tourism rely on both consumptive and non-consumptive uses of natural resources. Although these activities have increased since the spill, several resources have not yet recovered from the spill and beaches used for recreation contain lingering oil. Resources that are important to recreation and tourism, but are still not considered recovered from the spill or their recovery is unknown include harbor seals, Kittlitz's and marbled murrelet, pigeon guillemot, clams, mussels, harlequin ducks, sea otters and killer whales. Sportfishing resources for which the recovery status is unknown are cutthroat trout and rockfish. However, the salmon species that were injured (pink and sockeye salmon) are recovered from the effects of the spill.

Even though visitation has increased since the oil spill, the Trustee Council's recovery objective requires that the injured resources important to recreation be recovered and recreational use of oiled beaches not be impaired. Lingering oil remains on beaches and in some localized areas this remains a concern for users. Moreover, several natural resources have not recovered from the effects of the spill.

Therefore, the Trustee Council finds recreation and tourism to be RECOVERING from the effects of the spill, but not yet recovered.