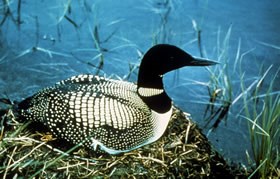 Injury
Carcasses of 395 loons of four species were collected following the spill, including 216 common loons. Current population sizes in the spill area are not known for any of these species, but it is estimated that the 216 collected common loons represented between 720-2,160 total individuals that died as a result of the initial oiling event. Common loons in the spill area may number only a few thousand, including only hundreds in Prince William Sound. Common loons injured by the spill probably included a mixture of wintering and migrating birds. The specific breeding areas used by the loons affected by the spill are not known.

Recovery Objective
Common loons will have recovered when their population returns to pre-spill levels in the oil spill area. An increasing population trend in Prince William Sound will indicate that recovery is underway.

Recovery Status
Boat-based surveys of marine birds in Prince William Sound give some insight into the recovery status of the loons affected by the oil spill. Pre-spill counts of loons exist only for 1972-1973 and 1984-1985. After the spill, contrasts between oiled and unoiled areas of the Sound indicated that loons as a group were generally doing better in unoiled areas than in oiled areas. Thus, the survey data suggested that the oil spill had a negative effect on numbers of loons (all species combined) in the oiled parts of the Sound.

Common loons exhibited declines in population numbers and habitat usage in oiled areas in 1989 but not in 1990. There was a weak negative effect of oiling on population numbers again in 1993, but not in 1996 or 1998. Based on the boat surveys carried out through 2000, there were indications of recovery, because in that year the highest counts ever recorded for common loons in PWS. In addition, July 2000 counts were the third highest of the 11 years since 1972, although these increases were limited to the unoiled portion of the Sound. Loons are a highly mobile species with widely variable population numbers and the pre-spill data were limited, thus, this one year of high counts in the unoiled areas was insufficient to indicate that recovery had started.

Population surveys conducted from 1989-2007 found increasing winter population trends in common loon densities in oiled areas. The summer counts do not show a consistent positive relationship, however the summer counts of loons are usually low and variable because they are predominately found on their breeding grounds in other areas during the summer. Common loons have an intrinsically low population growth rate and relatively large numbers of carcasses were recovered after the spill, yet post spill winter population counts of common loons have met or exceeded available pre-spill counts for all years measured since the spill, except 1993.

Given the long-term positive changes in winter population information, common loons are considered RECOVERED from effects of the oil spill.