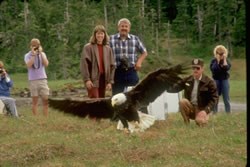 Injury
The bald eagle is an abundant resident of marine and riverine shoreline throughout the oil spill area. Following the oil spill, a total of 151 eagle carcasses was recovered from the spill area. Prince William Sound provides year-round and seasonal habitat for about 6,000 bald eagles, and within the sound it is estimated that about 250 bald eagles died as a result of the spill. There were no estimates of mortality outside the sound, but there were deaths throughout the spill area. In addition to direct mortalities, productivity was reduced in oiled areas of Prince William Sound in 1989.

Recovery Objective
Bald eagles will have recovered when their population and productivity (reproductive success) have returned to pre-spill levels.

Recovery Status
Productivity (or reproductive success as measured by chicks per nest) was back to normal in 1990 and 1991, and an aerial survey of adults in 1995 indicated that the population had returned to or exceeded its prespill level in the sound.

In September 1996, the Trustee Council classified the bald eagle as RECOVERED from the effects of the oil spill.