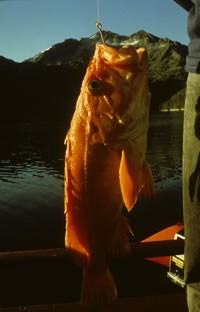 Injury
Dead rockfish were observed throughout the Sound immediately following the Spill, but an absolute count was never documented. Necropsies of five fish indicated that oil ingestion was the cause of death. Additionally, hydrocarbon concentrations in dead fish from oiled areas were higher than those from unoiled areas. Closures to salmon fisheries apparently caused increasing fishing pressure on rockfish, which may have adversely affected local populations.

Recovery Objective
Due to the continuing lack of data on rockfish, no recovery objective can be identified.

Recovery Status
From 1989-1991, higher petroleum hydrocarbon concentrations were measured in rockfish from oiled areas when compared to unoiled areas. Interpretation of these data is limited, however, because oil accumulation differs by species and by age of the fish, and these variables were not fixed across sites. Other Council-funded studies have been conducted on rockfish since the Spill, including 1) an examination of larval growth of fish, (including rockfish) in 1989; 2) a genetics investigation designed to identify species of rockfish larvae and young in the Gulf of Alaska and 3) a microscopic examination of fish tissues to identify lesions associated with oil exposure. These studies were inconclusive as none of them directly linked exposure of Exxon Valdez oil to any of the endpoints that were measured.

It is unlikely that rockfish are currently being exposed to lingering oil because known pockets of lingering oil rarely occur in their preferred habitat. Documented lingering bioavailable oil is in the subsurface sediments of the intertidal zone, and rockfish mostly occur in differing habitats of subtidal areas and in pelagic environments. From 1999-2000, no differences were measured in physiological responses to oil in rockfish from oiled and unoiled areas.

Rockfish are managed by the Alaska Department of Fish and Game for recreational fishing and the North Pacific Fisheries Management Council for commercial fishing in PWS. Data collected by both groups in the years since the Spill indicate that the population is healthy in Prince William Sound and have shown no biomarkers of oil exposure. There have been no demonstrated differences in population or breeding success between oiled and unoiled areas.

As there is no defined recovery objective, we used objectives set by other injured resources to determine the rockfish’s recovery status.

We consider rockfish to be very likely recovered.