Injury
Mussels are a keystone species in the nearshore environment throughout the spill area and are locally important for subsistence users. They provide prey for harlequin ducks, black oystercatchers, juvenile sea otters, river otters and many other species. Mussel beds are also important components of intertidal habitats because they provide physical stability and habitat for other organisms in the intertidal zone. Although mussels were coated with oil from the Exxon Valdez, dense mussel beds were purposely not disturbed during cleanup operations so the stability and habitat they provided would be preserved. However, some unconsolidated groups of mussels were subjected to hot water high pressure washing. 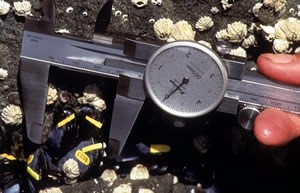 In 1989, after the spill, concentrations of oil in mussel tissue from the oiled area increased rapidly. These concentrations were typically far higher than in mussels from unoiled areas (or in mussels sampled from 1977-1979). The chemical composition of this oil was consistent with Exxon Valdez oil. Long-term mussel contamination occurred where substantial amounts of oil was trapped in sediment; primarily within coarse-textured habitats, including heavily oiled beaches exposed to considerable wave and storm energy (e.g., Sleepy Bay). In 1991, high concentrations of relatively unweathered oil were found in the mussels and in underlying byssal mats and sediments in certain dense mussel beds. No differences in abundance or biomass were documented in sheltered rocky and estuarine habitats. However, in coarse-textured habitats along the Kenai Peninsula, mussel populations were still affected.

Recovery Status
The primary route by which mussels accumulate oil is through ingestion of petroleum hydrocarbons in the water. Much of the lingering oil in the Sound and the Gulf of Alaska is sequestered in the subsurface sediments. Mussels are found both as epibiota, attached to the surface substrates, and also partially embedded in coarse sediment, where they could come into close contact with oiled sediments. It is possible that mussels could filter particulate and dissolved hydrocarbons from the water if the oil is re-suspended during storm surges, wave action or when underlying sediments are disturbed by predators. The current distribution of oil within a mussel bed is determined by water flow, amount of oil present, sediment grain size, and disturbance history.

After the spill, hydrocarbons accumulated in mussels for about a decade at sites where oil was retained in sediments. Remaining oil was biologically available for many years after the spill, but the frequency of occurrence and average hydrocarbon concentrations in mussel tissue has declined with time. In most instances concentrations of oil in mussels from the most heavily oiled beds in Prince William Sound were largely indistinguishable from background by 1999. However, concentrations in sediment underlying the mussel beds remained elevated.

Data from 2012 indicated that hydrocarbon concentrations in mussels, even on armored beaches where elimination has been slow, are not different from background.

As mussels have met all of their goals for recovery, they are considered recovered from the effects of the Spill.