Remote Cameras Tested and In Use 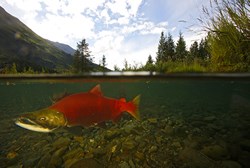 The use of remote video camera technology has proved to be a cost-effective way to monitor fish and wildlife in the field, as well as a strong tool for public education. The Trustee Council sponsored two pilot programs using remote video cameras, one to count salmon in streams and one to monitor seabirds in the Barren Islands. The seabird project included live video feeds to the Pratt Museum in Homer, where specialists monitored common murres and helped educate visitors about seabird and forage-fish ecology.

Remote video escapement recorders were deployed in 1999 to count sockeye salmon on Delight Creek, East Nuka Bay; and in 2000 to count chum and pink salmon on Port Dick Creek, Port Dick Bay (outer coast of the Kenai Peninsula). The camera used time-lapse video which allowed technicians to review 1,100 hours of escapement information in approximately 42 hours. The camera count documented 85-87% of the salmon counted at a weir, demonstrating it could be an accurate and cost-effective alternative to aerial surveys and weirs. Researchers have continued to improve upon the original design and today remote-video escapement recorders are being used by state and federal agencies to monitor salmon escapement at various locations throughout Alaska, the continental United States, and Canada.