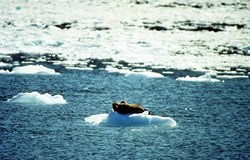 Trustee Council-funded research has also enabled researchers to determine what a harbor seal eats by looking at the kinds of fats in its blubber. This new research tool allows a better understanding of whether, and how, prey availability affects the population of harbor seals in the Prince William Sound.

The population of harbor seals in Prince William Sound was in a continuing decline prior to the Spill. Researchers took blubber samples from seals and compared their fatty acid profiles to those of forage fish. Results indicate that the fatty acids in herring, pollock and other fish are very different from each other and that the differences are detectable in seal blubber. Analysis of seal blubber from southeast Prince William Sound, for example, showed that seals at Channel Island were eating mostly herring, while seals at Stockdale and Port Chalmers were eating mostly pollock which, with far less fat, is a less-productive prey item for seals. This also demonstrated that the seals are local foragers, as these areas are only five to ten miles apart, yet the seals were apparently eating different prey. Fatty-acid analysis has become an essential research tool in the restoration of Prince William Sound harbor seals.