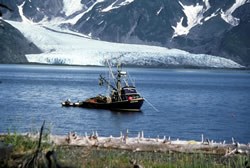 The Council has made a concerted effort to involve local communities affected by the oil spill in the restoration program. Projects funded include habitat enhancements of interest to sport and commercial fishermen, restoration of subsistence resources, food safety testing, and public outreach and participation.

Here are some highlights that have resulted from the Trustee Council's effort to incorporate meaningful public participation and community involvement into the restoration program: